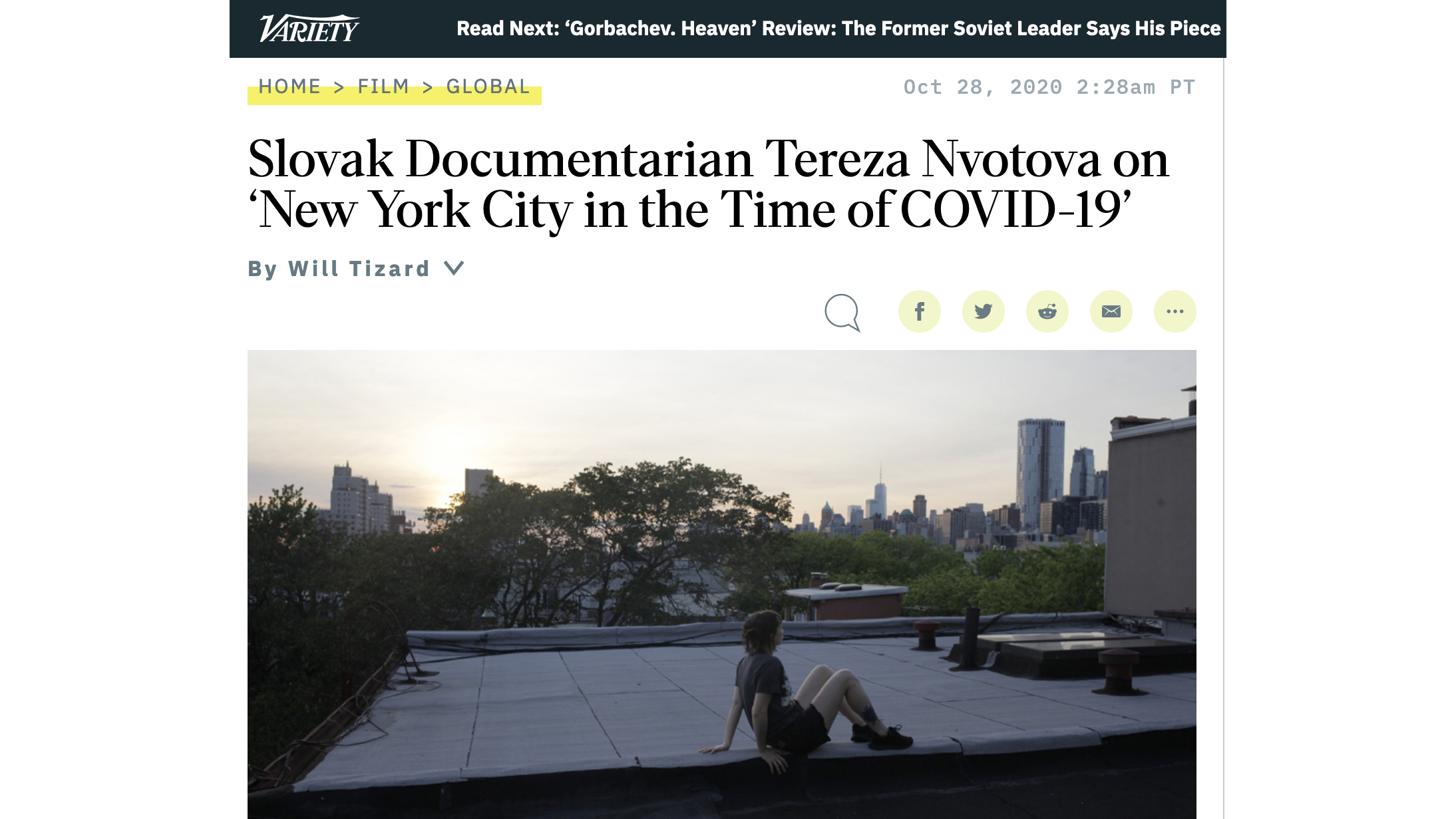 Slovak documentarian Tereza Nvotova, who has confronted corruption and politics in past films such as 2017’s “The Lust for Power,” found herself beached in New York during the COVID-19 outbreak in the spring, unable to return legally to her home in the Czech Republic with her partner, American actor Jacob Pitts. Then she got an assignment from public broadcaster Czech TV to film the city and how its people were faring.

Screening at Ji.hlava Film Festival (you can watch it here) as one of several docs made during the pandemic, each embracing a different perspective and style, “New York City in the Time of COVID-19” is a powerful, funny and poignant short in which Nvotova conscripts her friend Peter to take her out on interviews via motorcycle to avoid virus-infested public transit.

Before solving her legal problem by having an officiator conduct a marriage from his window, she gathers wide-ranging comments from hospital nurses, paranoid protesters and passers-by, one of whom says the real danger is that America elected “a moron” as President.

How did you decide on the narrative thread to follow while locked up in your apartment, depending only on the Internet for information as it was morphing?

There was no narrative structure before the shoot other than my own curiosity, my own personal life and the problems I got into. I was locked at home for a month, not being able to get back to Europe and when I got a call from Czech TV, I felt like I can’t refuse.

I’m a filmmaker and what else am I supposed to do in a time of crisis? Then I started to contact anyone I could – through Facebook groups, media, my own contacts. It’s always the same – people know people so you get to the right ones eventually.

What was your reaction to seeing the numbers of infections and deaths rising while no controls were mandated in New York – knowing the Czech Republic was under strict lockdown?

My reaction was to lock myself at home before everyone else did. We took long walks in our neighborhood and watched crowded restaurants and bars from outside and felt like we were watching some apocalyptic movie about a pandemic being spread in real time.

Were you surprised to see Americans without masks calling public health rules fascism? You seem quite non-judgmental about them in the film.

I was not shocked because before I went there, I watched these reactions online. However, meeting these people is always something different. Many of them were very emotional and hysterical and unable to make an argument clearly. In the film, I didn’t feel the need to comment on it because it’s pretty clear given the facts and numbers how wrong they were.

At what point during the film did you decide to marry? Was your family upset they couldn’t be there? We don’t really hear from them on screen.

Well, I had only 26 minutes. I wanted to make a longer movie but because this was the deal with Czech TV, I couldn’t. We decided to marry sometime during the filming. Once I was able to get a ticket back home, we knew Jacob couldn’t go with me if we were not married. I couldn’t visit him in the U.S. either.

The only problem was that the New York marriage office was closed for more than a month. Then they opened an online office in Albany and that’s how we finally got a marriage license. My family was very happy for us plus they know that we’re gonna do one more wedding in Prague once COVID-19 is over.

Now that you’ve managed to get Jacob to the Czech Republic, what does he think of how the COVID-19 crisis is being managed here?

He came back with me but in August he flew back to the U.S. Now he’s waiting for the elections so he can vote in person. He’s coming back to Czech Republic in two weeks and of course he’s not happy about the situation here but, given the worldwide crisis and Czech behavior during the summer, it’s not so surprising.

The motorcycle footage rolling around the city is quite evocative – almost like one of the post-Apocalypse sci-fi movies of the 70s, what with so many empty streets.

On the bike it was all GoPro – we borrowed the new 360-degree one but then Peter lost his job and had to return it.